Conservation biologist Chris Schadler spoke about ‘The Real Eastern Coyote’ to a standing-room-only crowd of more than 70 at the Middleton Town Hall on a rainy Sunday afternoon in March. This free public presentation was co-sponsored by Moose Mountains Regional Greenways (MMRG) and Branch Hill Farm/Carl Siemon Family Charitable Trust (BHF/CSFCT).

A canid expert with 30 years of wolf and coyote research, Schadler is the NH representative of Project Coyote and a co-founder of the NH Wildlife Coalition, which fosters co-existence with coyotes and more generally advocates for responsible conservation of predator species. In accord with her experience, Schadler presented copious information about eastern coyotes, a widespread but commonly maligned species throughout New Hampshire.

Coyotes are not native to New England. This highly adaptive animal migrated from the western U.S. to our area in the middle of the 20th century, filling the void left by the extirpation of wolves. Eastern coyotes are hybridized with red wolves and larger than their western coyote relatives but smaller than wolves, having have bigger ears and longer tails.

Schadler emphasized that coyotes play a valuable natural role and provide ecosystem services. Although their diet is very adaptable, they frequently hunt smaller predators, including raccoons and foxes, which benefits populations of ground birds such as quail and waterfowl. Coyotes also consume carcasses and keep rodents in check, which helps control ticks and associated diseases. As with any predator, coyotes cull out the sick, which benefits the health of the prey species population.

Although it is common for farmers or pet owners to claim they need to kill coyotes to protect their animals, Schadler asserted that it is possible for us to co-exist with coyotes. Keeping in mind that coyotes hunt both day and night, preventive measures, such as electric fencing, leashing pets, and denying access to pet or bird food, are effective if used consistently. In contrast, killing one or more of a dominant coyote pair will disrupt the family structure, disperse the pack, and cause an increase in the coyote population and the number of coyote attacks. Left intact, the pack’s population is self-regulating based on availability of food and habitat. Only the dominant monogamous pair will reproduce, an average of 4 to 6 pups with 50% natural attrition of the litter.

April and May are when coyotes birth their pups, during which time a dominant male guarding the den may be particularly testy. Schadler advised that if a snarling coyote is encountered, “Stay calm and retreat slowly and quietly.” On the other hand, the sound of coyotes howling should not worry humans; it generally means that pack is being called in.

The take-away message from Schadler’s presentation was that the eastern coyote is a desirable predator species in our ecosystem and does not deserve its current status as the most persecuted carnivore in NH. The complete lack of restrictions on killing coyotes by any method and the common practice of killing contests were obvious sources of distress to Schadler, who devotes much effort to increasing public understanding of and respect for this unique species. 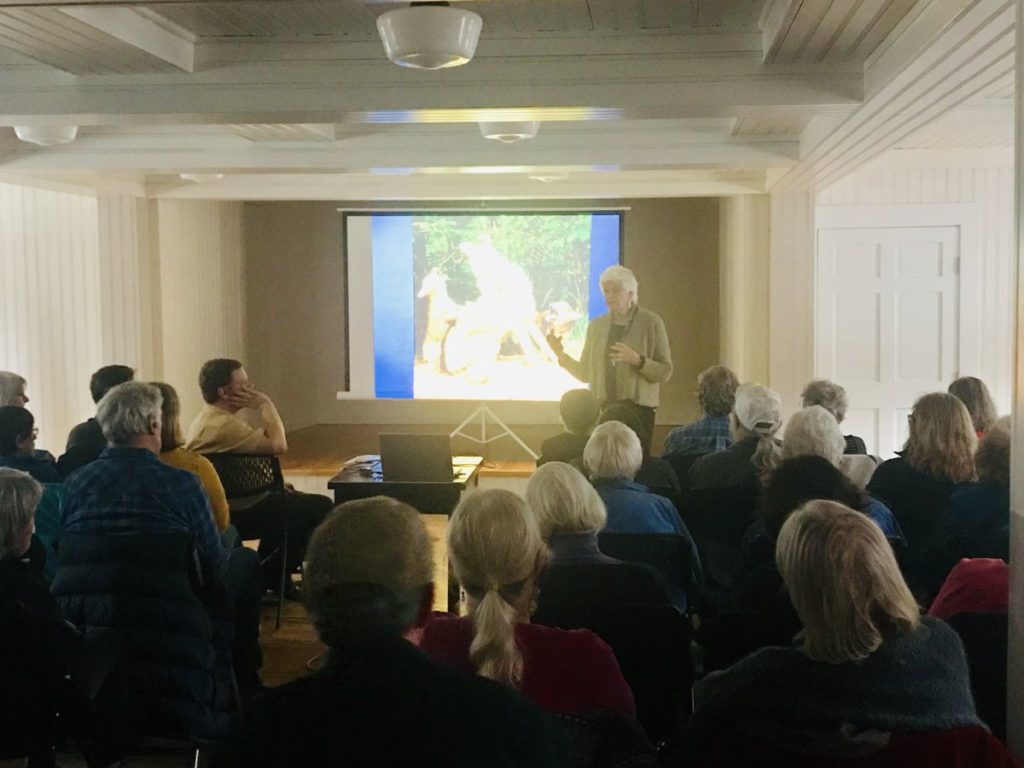