Forester Charlie Moreno knows that a forest is more than the trees. In this case, the forest he was showcasing was Branch Hill Farm’s Salmon Falls Woodlands in Milton Mills and he wanted to share a long-range historical perspective of how the forest, wildlife and land have changed over millennia. This natural history tour, which attracted a multi-generational group of twenty-four, was offered by local conservation partner organizations Moose Mountains Regional Greenways (MMRG) and Branch Hill Farm/Carl Siemon Family Charitable Trust (BHF/CSFCT).

Moreno had placed markings along the Salmon Falls Woodlands trail to graphically illustrate the time frame of evolutionary processes at work on the land. The group was carried aboard the Branch Hill Farm hay wagon out to a peninsula between the Branch and Salmon Falls Rivers, where evidence of former ice age geology was apparent in the form of a large glacial erratic at the edge of the Branch River. Moreno encouraged participants to use their imaginations: “Think of glacier ice a mile thick above us. As it retreated, it dropped off this huge rock, a rock that was probably scraped off a ridgetop many miles away!”

Moreno explained that as the glaciers retreated, they left behind an abundant supply of rocks, many of which are used in the field stone walls emblematic of the NH landscape. Earth’s climate gradually warmed and cooled and some animal populations thrived while others became extinct.  Eventually, humans arrived, established travel routes and seasonal encampments, used controlled fires to manage vegetation, and planted crops on river terraces.

Another feature Moreno pointed out was a flat steplike feature in the landscape, about 20 feet

above the river’s edge. Such natural terraces along waterways were used by Native Americans for planting maize or squash or as campsites during their migratory travels between ocean and inland. Moreno commented,” It would be great to do an archaeological study in this area. I wouldn’t be surprised to find traces of Native American campsites or forest trails.”

In more modern times, arriving settlers found abundant resources, cleared the land and started families. 1950s aerial photos show that the Branch Hill Farm peninsula was clear cut at that time although it is now completely re-grown as a pine forest.  As the group walked back along the woods road, they stopped near the Salmon Falls River at the Applebee cemetery and cellar hole, which date to the 1800’s. Cynthia Wyatt, Managing Trustee of BHF/CSFCT, credited logger Larry Hersom with clearing the historic sites so they are now visible from the trail.

Workshop participant Joann Coskie thought the hike setting was beautiful and reflected afterwards, “The first few inches of history only took us back a few centuries.  A hay wagon ride was necessary to journey back to the ice age!” 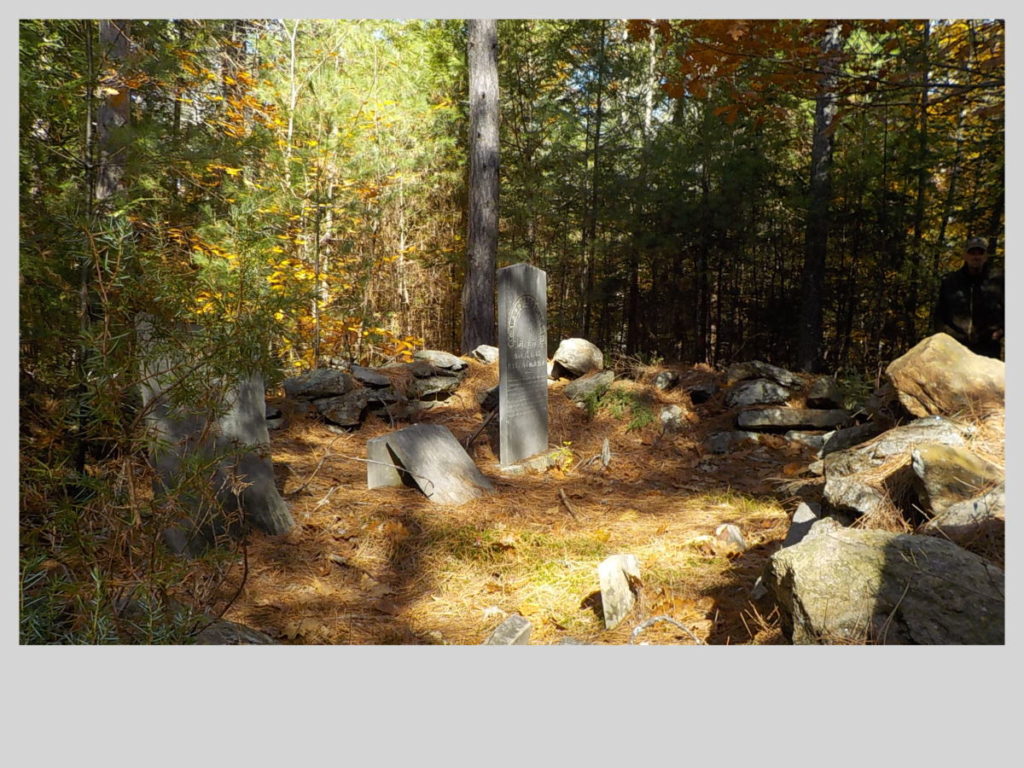 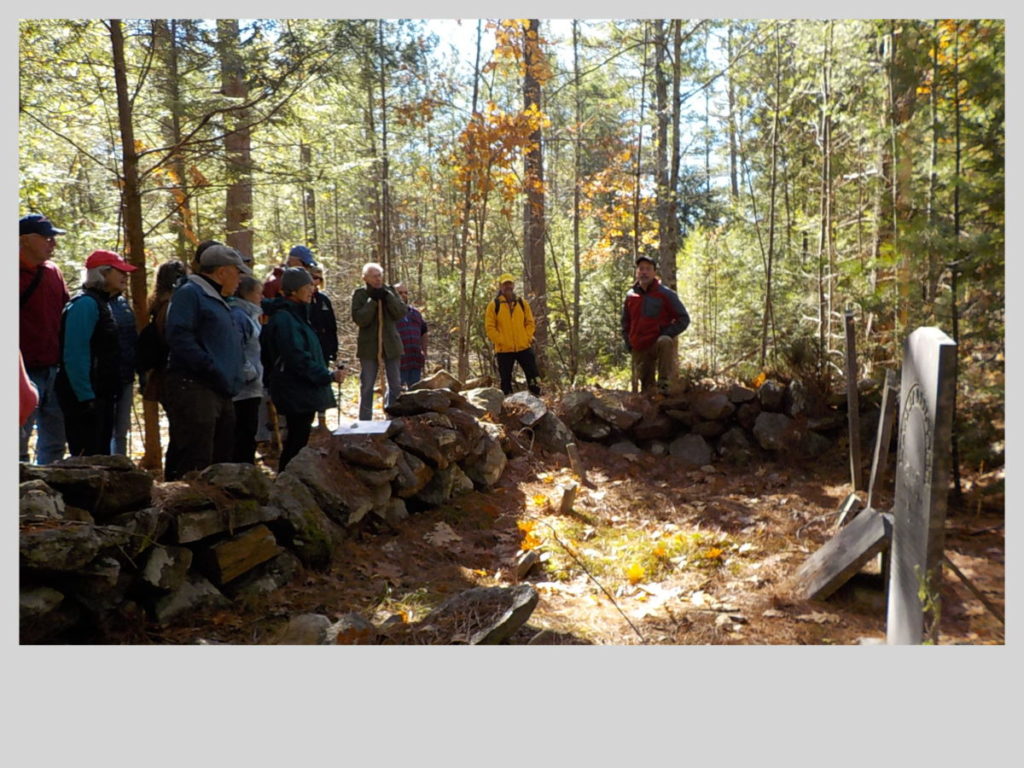 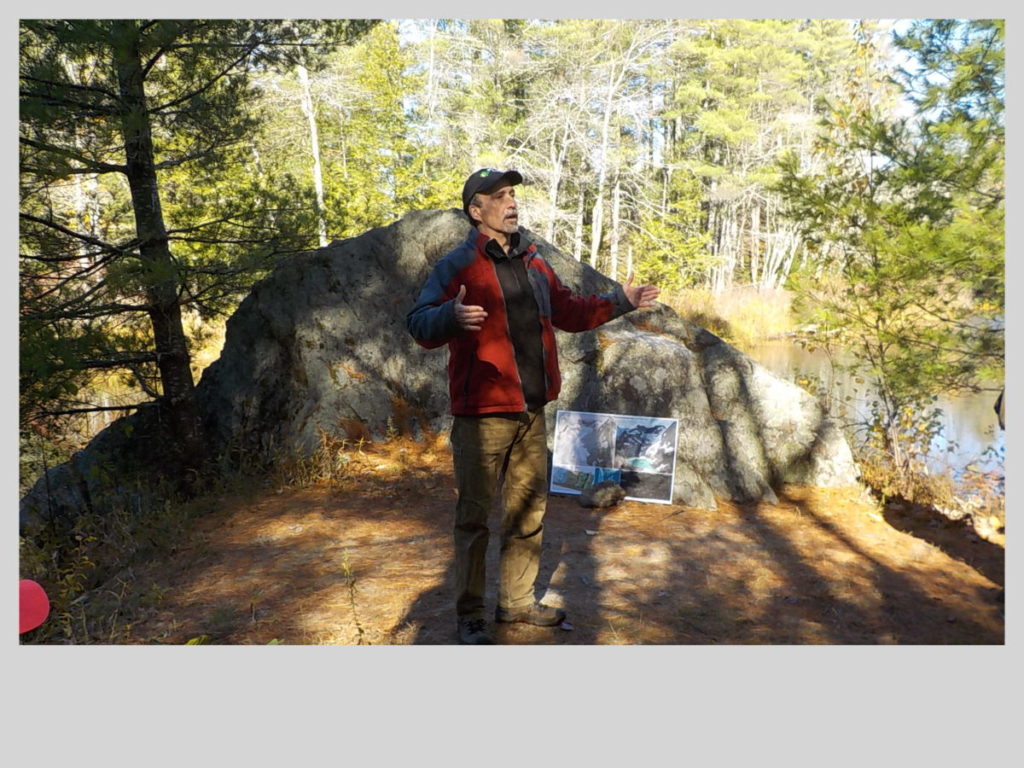 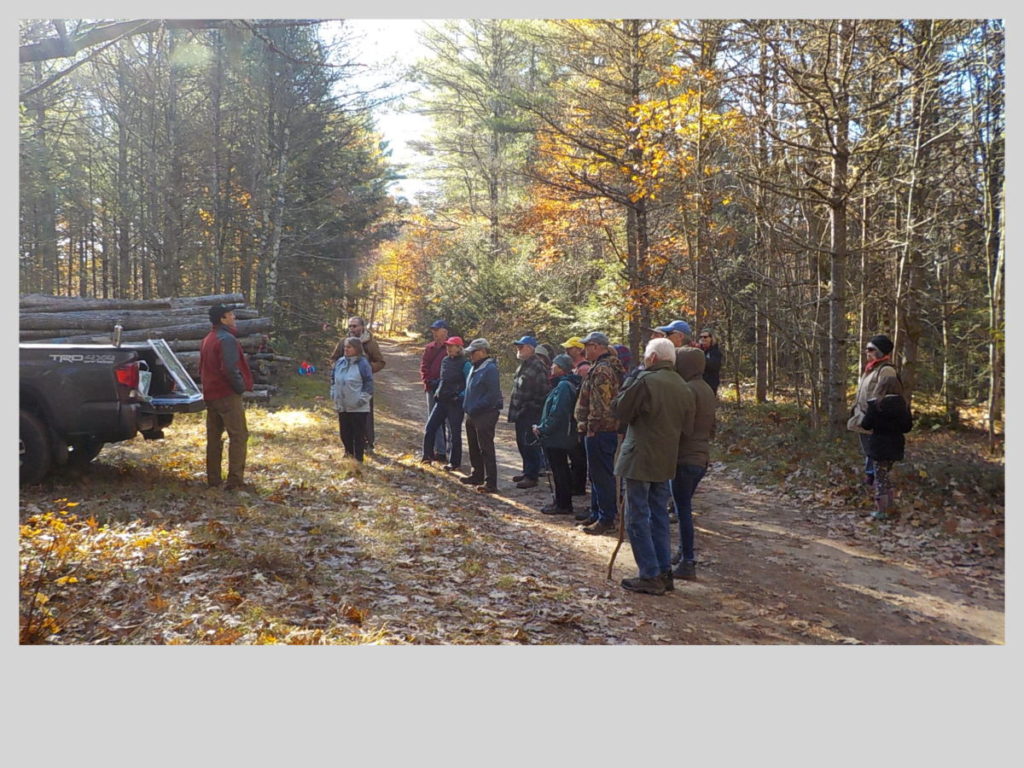